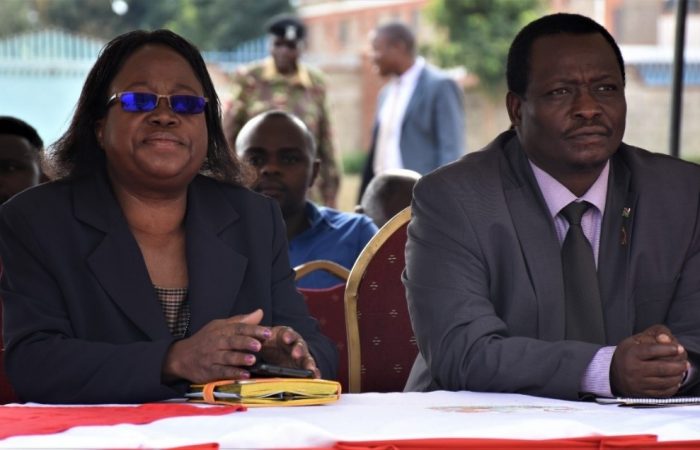 The Ag. VC. Prof. Dorcas Isutsa and DVC-AFP&D follow proceedings during the inaugural address to freshmen

The Vice-Chancellor Prof. Dorcas Isutsa addressed the 1st Years, the first cohort to the institution under her leadership. The Ag. VC urged the freshmen to quickly adapt to the traditions and embrace the culture of Chuka University. She urged them to embrace peaceful existence with the host community that the university has enjoyed since its development.

In her speech, the Ag. VC welcomed and congratulated the students for being admitted to Chuka University, one of the best institutions of higher learning in East Africa and the only prophetic University. “I know you have already received a lot of information about the University.  This is the culmination of the orientation week. It gives me a lot of pleasure to meet you for the first time.

Orientation is familiarization with the University by giving information to the new students on where you are, the traditions of your new environment, and obligations. Those who do not attend orientation may fail to cope with the demands of the academic learning environment. They may display maladjusted behavior. Our core business is teaching and research. We will impart knowledge to you that will make you empowered in all spheres. Do not be like the cow that was taken to the river and refused to drink the water, said Prof. Isutsa. The Ag. VC further reminded the freshmen that their parents and government have invested a lot in them. She challenged them to be much better than them. “They have a lot of hope in you. Your village, your clan, your community and Kenya expects a lot from you. You are the hope of the Nation” noted Prof. Isutsa.

“You are also on your journey to Canaan. We will empower you with the knowledge that will make your brains produce milk and honey after finishing the University. Thus after completing your studies and after being employed or employing yourself, you should be able to generate wealth”.

The DVCs AFP&D- Prof. Henry Mutembei, university management also attended the Vice-Chancellors keynote address to the 1st Years alongside other University staff and students. The CUSA leaders, led by Chairman Jasper Awidhi also echoed the VC’s message urging the freshmen to be ready to learn in the environment and grow in spiritual ways, urging them to remain disciplined in their period of studies in order to avoid unnecessary trouble that might end their academic journey in unceremonious ways. The new students reported to campus on 5th September 2022. They have undergone orientation and tackled topics on life on campus, alcohol and drug abuse, relationships, personal finance management, and mental health amongst other many issues that directly affect students on campus. The students were addressed by various heads of departments, University Management and, invited guests that included Officer Commanding Police Station, Ministry of Health, HELB officials, and NACADA among others. The students were introduced to various clubs and associations within the university. The freshmen were advised and guided on various career choices related to various courses. The speakers emphasized on a holistic approach to studies and the need to embrace one another because of the cultural and religious diversity.  When reached for comment, the Registrar of Academic Affairs Dr. Samuel Chege gave a thumbs up to the team that worked tearlessly towards making the admission exercise an overwhelming success. He noted that there were thorough preparations in readiness to the admission exercise.